Mr. Matthew Dallas and Mr. Jeffrey Young Appointed to Biostage Board of Directors 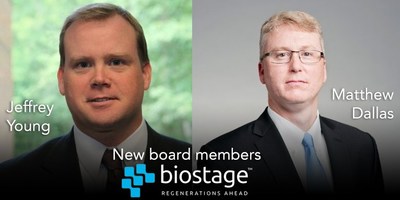 Mr. Dallas brings more than 20 years of financial management experience, including 18 years in the life sciences industry. He is currently the CFO of AVEO Oncology, a biopharmaceutical company advancing a broad portfolio of targeted oncology medicines and other unmet medical treatments. Prior to AVEO, Mr. Dallas served as CFO and Treasurer of CoLucid Pharmaceuticals, a position he held through that biopharmaceutical company's initial public offering, follow-on offering, and subsequent acquisition for approximately $960 million by Eli Lilly and Company in March 2017. Mr. Dallas also previously worked at Genzyme Corporation, NEN Life Sciences, and Kimberly-Clark Corporation where he held various positions of increasing responsibility in finance and accounting. Mr. Dallas holds a bachelor of science in finance from the University of Tennessee, Knoxville.

Mr. Young, meanwhile, also brings over 20 years of finance, capital markets, and financial operations experience in the life sciences sector. He is currently the CFO of Axial Biotherapeutics, a biopharmaceutical company developing a new class of therapeutics for central nervous system (CNS) disorders by harnessing the link between the human gut microbiome and the CNS. Prior to Juniper, Mr. Young served as CFO and Treasurer of OvaScience, Transmedics and Lantheus Medical Imaging. He also previously worked at Critical Therapeutics, PerkinElmer, Inc., and PriceWaterhouseCoopers LLP where he held various positions of responsibility in finance and accounting. Mr. Young holds a bachelor of science in business administration from Georgetown University.

Mr. Dallas commented, "Biostage is at an important inflection point in its evolution and I am excited to join its Board of Directors. I believe my financial management and business support experiences in early- and late-stage life sciences companies will help me guide the decisions Biostage makes as it advances its Cellframe™ technology to patients."

Mr. Young commented, "I am excited to join the Biostage Board of Directors. The Company is at an important time as an early stage biotech working to advance its product to clinic. I hope my financial and strategic experience in early and late stage life science companies will enhance Biostage's strategic decisions as it advances the Cellframe™ technology to bring a valuable medical technology to patients."

Biostage CEO Jim McGorry commented, "I and the other members of the company's Board are excited to welcome Jeff and Matt to the Biostage Board. They both bring to our Board seasoned financial experience in life science companies like Biostage that will provide us with additional strategic financial insight and guidance. We are very happy to add these gentlemen as Board members as we explore different fundraising avenues to ensure our life-saving product ultimately reaches the patients in need."